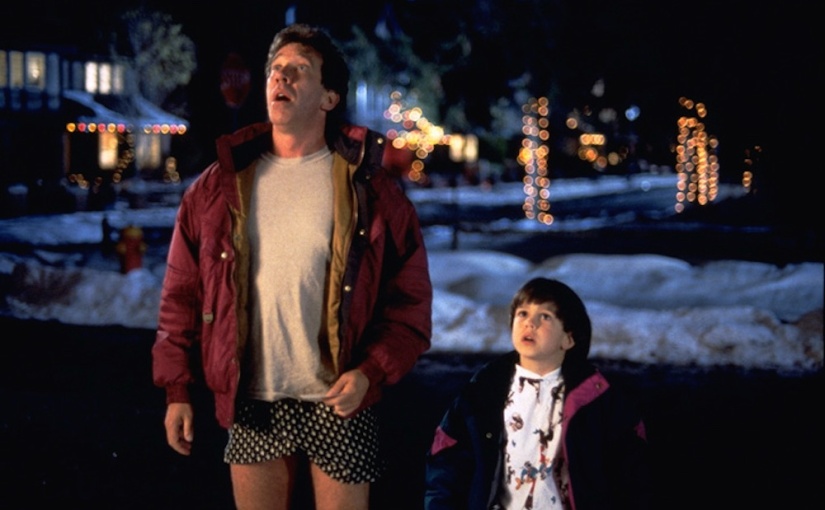 The Santa Clause has always been for me that movie that signals Christmas is here. Well, maybe not literally always, but at least since I was in 6th grade and watched it a minimum of once per day every day in December… Minimum meaning, yes, there were days when I watched it twice, sometimes three times in a single day. That seems insane to me now, but the fact remains: Christmas just isn’t Christmas without revisiting The Santa Clause.

Revisiting this film annually as an adult has been a much different and (surprisingly) rewarding experience. As a kid, I just saw the funny gags and overwhelming Christmas spirit, which are still there in abundance, but now, whether due to my growing up and developing a better understanding of human relationships, or perhaps having sat through the last fifteen years of depressingly sanitized family films, I see The Santa Clause as a really sharply written film that not only acknowledges that some kids may have messy home lives, but merges that reality with a welcome dose of fantasy to create a holiday film with just enough honesty to balance out its heavy sentimentality.

Divorce is basically a cardinal sin in family films these days; The Santa Clause not only presents a set of divorced parents, but turns that dynamic into a continuous source of comedy, ranging from silly to bitter. In an early scene, Scott Calvin (Tim Allen) asks why his ex-wife, Laura’s (Wendy Crewson) husband, Neil (Judge Reinhold), won’t get out of the car to say hi for a moment. “Because you’ll just end up saying something snotty,” his son, Charlie (Eric Lloyd) says. “No… Could be rude, or sarcastic… Whatever it takes,” Scott replies as he smiles and waves to Neil.

Exchanges like this permeate the film, but never upstage the sentimentality of its central premise: that Scott is becoming Santa Claus after the previous Santa fell off of Scott’s roof. It’s an absurd idea, but kind of perfect; as a kid, it reaffirmed my belief in Santa Claus, and as I’ve gotten older, it has helped preserve my view of Santa as a representation of merriment and goodwill rather than as a figurehead for consumerism, though to do so means ignoring one of the newly-minted Santa’s first lines: “[These reindeer] are a gift… From the cable company… Merry Christmas, Charlie, we’re getting the Disney Channel!”

Egregious product placement aside, The Santa Clause is sold, in part on some great production design by Carol Spier (The North Pole set is outstanding), but mostly on a great comedic performance by Tim Allen. He evolves from wry and slightly bitter to genuinely sincere as he bonds with his son and gradually accepts his role as Santa. Yes, it’s a little cliche and schmaltzy, but the film is always kept in check by reality. It’s a film that features a kid saying, “You do believe in Santa, right?” and adults later describing the exact moment they stopped believing in Santa (three year-old Neil asked for an Oscar-Meyer Weinie Whistle and never got it).

It seems like every time I watch this film as an adult, something new resonates with me in a way it never had before. This time it was an exchange toward the end that perfectly encapsulates the dichotomy of reality and fantasy the film is presenting. Laura finally realizes Scott really is Santa after thinking he was insane for most of the film, in a tear-filled close-up, choking out, “You’re really him… You really are Santa Claus,” to which Scott replies, “Pretty cool, huh? And your parents thought I’d never amount to anything.”

Forgive me if I’m focusing on the drama and reality of this silly Christmas film, but when I watch it these days, I’m always surprised by how sharp the writing is, how it always seems to hint at the lives these characters live off-screen. That said, it never fails to make me laugh out loud, and even tear up a little; the shot of Judge Reinhold tooting the Weinie Whistle parachuted down to him from Santa’s sleigh is both hilarious and incredibly sweet. I fully admit that the immensity of my love for this film may border on the irrational, but that love is not totally unfounded; it’s a beautiful film.